A day in the life of a Rahul Dravid fan


I sat there in awe. I am seeing him for the first time. I narrowly missed him at Cricinfo, but this time I was determined. Woke up at 6, ate breakfast, caught the 7.30 bus from my home to Richmond Road and then an auto to the Hotel Lalit Ashok, 35 kms from my place, just to watch Dravid speak. That, on a Sunday morning.

I reached there 1.5 hours before the session started. I strolled around the hotel, keeping a tab on the venue. They were cleaning it. I wanted a closer seat. In between I went to checkout the Atta Galatta book store. It was empty. The proprietor was prepping up the volunteers. He promised them discounts on books and Pizza for lunch. I thought he would offer some to me too, but none came. I buy Hansda Shekhar's "The Adivasi will not Dance"

By the time I came back, the first few rows were taken. I am waiting for Reji Ravindran, friend for 20 years. I meet a few friends from the Twitter world. I am itching to sit. Reji, where are you ? I call him. I'm at Cubbon, he replies. Finally he strolls in, we are lucky to get a seat, not at the back nor at the front. Then Dravid arrives. I catch a glimpse. The crowd roars, for their beloved Bengaluru Son. The Wall. I'm impatient. Shall we go in the side and stand? I ask Reji. That was what we did to catch another giant, the 10/74 Anil Kumble, the previous day.

We don't. Because the session has started.

Prem Panicker is brilliant. He is one sports journalist I have been following for a very long time. He introduces Dravid as an immovable object who is an irresistible force.

Rajdeep pokes, Dravid leaves outside the off stump. Dravid says the cash is good for cricket. He wants players to be authentic to themselves, which makes sense. He talks about a 48 hour train journey where he goes and picks brains of all the great Karnataka players. He also leg glances the Yo Yo test deftly to the fine leg boundary. All laced with good humour. Man, when did he become such an nice speaker. I can listen to him all day.

Then an important question is asked. Will you ever write your story? The crowd cheers.

I wait, because I want to pre-order the book if his answer is yes.

He says - "I want to write a honest book, and I don't want my family to put through that pain."

My hands join for an ovation without my knowledge. I am disappointed a moment later. 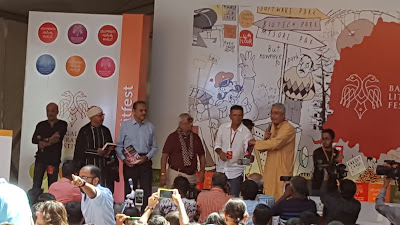 Rajdeep pokes again. Rajdeep is romantic. He is worried about kids. Dravid says, they are all fine, I see them in and out. He quips, "I hear about players being too big. Who made them big, yaar? A lot of other people have become rich by players being rich". Rajdeep smiles, but deep down, I think, for him it feels like a Shoaib Akhtar delivery which has grazed the abdomen guard.

Multiple times in two days Rajdeep is hit out of Hotel Lalit Ashok lawns. First by Kumble, now by the gentleman Dravid, who used to show aggression by defending a fast Allan Donald delivery in front foot.

Later greats join in. Kirmani has a compliment for Dravid. "You talk a lot well and humorous now. And you are doing well with the kids; you are the right choice"

Now. It is all over. I run with my copy of Timeless Steel, a book from Cricinfo, for an autograph. I can see a small crowd following someone. Phones are in air. Taking selfies with the player who once batted like God. I can only push, but not progress. I come back.