and then there was dog...

Well.. my trip to home didn't go the way I expected it to be. To begin with I was never comfortable with the ride at the start. I was not getting my eye in, especially at the segment of road till you touch the Mysore Road. It is always tough. Early morning, the ever confusing twilight, lights from the opposite vehicles and plus my headlights were giving the indication that they would go off anytime. Then there was this oil leak, which was spotted much earlier but I never bothered, topped her up and just started with full confidence. Somewhere down the heart I was having this hunch - "Oh something is not right" I stopped a lot to check the oil leak, didn't rev up the engine much, stood on my comfortable 70-80kmph speed. I crossed Mysore and Nanjangud on my way and cruising towards Calicut.
I now felt really comfortable and had changed my iPod play list to Boss' (A R Rahman) songs. And then it happened at 2 kilometers from Nanjangud. There was this dog eating something in the middle of the road, and a KSRTC bus was coming in the opposite way. I spotted it and immediately knew that it will give me some problem. By the time I released the throttle, the dog had decided which side to run back and it chose my side, and then everything just happened. I remember hitting on the brakes, the bike wobbling, the bus going past me on the other side, my bike going to the left of the road and me hitting the road. And then I stood up and ran out with pain to the side. The next thought I had was about what had happened to the bike and I see some really good people, who were coming in the car behind me, getting my bike onto the stand as petrol was coming out of the tank. They came to me, asked me about the injury, helped me remove my gear, helped with the First Aid Kit I had in my luggage and helped me get the bottle of water I had. My left hand was badly bruised, but thanks to my gear (Cramster Jacket - KJ - Thank You Man, Knee Pads and Studds Helmet) I was unhurt anywhere else. I looked at my jacket, the padding on the left shoulder was heavily torn, and the helmet and visor had bruise marks on it. And I was like thank god I was alive. I had put on the knee pads after initially forgetting about it and then I fell towards the left side of road and not to right. I was damn lucky. Otherwise I would have been writing this post from hell, if it had an Internet connection. The dog squealed around for sometime and took it flight towards heaven. 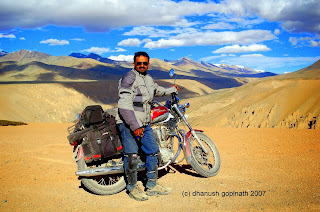 The people adviced me to take rest as I was getting giddiness and I rested like close to 45 minutes. Another car stopped by and a good fellow from that came and made my bike ready to ride. Red's left footrest, Crash Guard and gear shaft had bend on the impact, but otherwise she was perfect. These people left only when I was kind of ready to ride on. That is the beauty of riding solo and on the highways. You always find good people to help you. I couldn't have imagined the same if it happened in Bangalore. Just my perception.

I ride on after an hour and I reached Gundelpet, went to a hospital to do the dressing and have the X-Ray. But I could not take the X-Ray as it would take me another hour, since the Doctor was busy. So I decided to move on. I drove pretty slowly with the pain in hand and applying the clutch for shifting the gear was giving me nightmares. I had a very tough time riding down the Thamarassery Churam with Kurusinte Vazhi coming in the opposite direction (It was Good Friday). There were people all over the Ghats and understandably there was vehicles piled up moving slowly and riding half clutch was near impossible in that state. Well to praise myself, when the going gets tough, tough gets going :) .

So somehow I reach my home close to 2 hours late at 4.30 PM. My parents had a doubt that something had happened as I wouldn't have been so late, and when I called them in between the ride, I had told them there was lot of checking due to elections and about Kurisinte Vazhi . I reached home and mom was waiting and I told her about the accident. The next thing she tells me is that it is there in my horoscope that I will have injuries (Odivu and Chathavu) during this time (She is reading it a lot these days fro obvious reasons - Punnara Mon Pora Neranju Nilkuvanallo) and so it is ok. I removed my torn glove on the left hand and it was tough to remove it. The swelling had become so big and the golve had become tight. Then I realised there is definitely a fracture.

The next hours were spent in taking X-Ray, Achan first scanning it and confirming the minor fracture, going to hospital to put the plaster and the Ortho Doctor advised me 3 weeks rest. I was off for one week and came back office after that. Last week I removed the cast and now I am able to type with both hands. Even though that one week rest hampered my earlier plans, I had some really good time off to just think about in life in general, read a huge portion of The Brothers Karamazov (Simply Awesome - Red Salute to Doestoevsky), eat a lot and sleep. I voted after a long time and then did everything with my right hand till this last weekend.

And about rides. I am on for it anytime. This time after having the accident, I never had an issue in mind on driving on. I was confident as ever. Sometimes after an accident or fall, you are scared to drive on. It happened to me last time when I fell nearto my office. It was nothing and just twisted my ankle. But I was less confident while riding after it and for a few days. This time my only goal was to reach home. Red is now in Gopettan's Garage getting ready. He called me up and told that my bike's rear break drum had almost worn off and the rear wheel spokes had a dent. But this was not due to my accident. It was there even before I started my ride :).

Some days you just need to trust your vehicle.

Image - Me in the Riding Gear on My Himalayan Escapades

P.S: Thanks for everyone who wished me the best. Alexis and Sandeep special thanks to you two
Posted by Dhanush | ധനുഷ് at 11:36 AM 7 comments:
Email ThisBlogThis!Share to TwitterShare to FacebookShare to Pinterest
Labels: accident, dog, ride, vishu
Newer Posts Older Posts Home
Subscribe to: Posts (Atom)