My much hyped ride through Kerala just lasted two days. I rode from Bangalore to Mangalore and then from there to my home the next day. But I could never proceed after that.

I was late to sleep on Day 2 as we had some guests at home,and so I overslept a bit on Day 3. It was also raining like hell. So I decided to continue the next day, but I had that sense of dejection in me for inducing that break. Next day I was all set, and dressed up when Mom came with the tea. After a moment's silence she asked -"Are you sure you want to do this big adventure in this torrential rains? have you made up your mind to not give us some peace of mind? You went to Himalayas last year and do you know how much we were worried. And now you are doing this."

And that was it. I could have still gone ahead, but its never good to start anything with a negative mindset. Those words have put enough questions on my mind. Even though I wanted to go, I just could not. May be at that point of time, I realized there is no big dreams to achieve, if it puts your parents under tension. So that's the story. I stopped my journey at home. I informed Abhi and he was really happy for my decision.

Relaxed and chilled at home, with lots of fish in the diet, went to Calicut and grabbed myself a lot of books (16 in fact as I counted it now) from Mathrubhumi and DC book stalls, read Cormac McCarthy's No Country For Old Men (Dear Anon, it didn't impress me or Am I too old for Dishum Dishum. Will watch the movie soon.), Karan Bajaj's Keep Off The Grass (Too Good. A must read for IIM aspirants. My review on this will be coming soon-I Hope) and Basheer's Anuraagathinte Dinangal (What can I say about the Master) went to Mom's home town and yesterday came back here.

No. Don't come to the conclusion that I have stopped riding. That is never going to happen. It is just that at that point of time, my mind slowed down and decided to go with my parents wishes.

Well.. I may not yet be a Pavanai. May be I will we do this, some time later with a revised plan. The good thing I learned from this is that I should not make a ride through home. I should either end the ride at home or make my home visit during the last leg of the ride. Hope I can do that.

Thanks for all you guys who wished the best for me.

finding kerala and facing the monsoon through a redemption ride

I always wanted to chase the Kerala Monsoon, ever since I read Alexander Frater's "Chasing The Monsoon". I read the book last year and made an impulse decision; that this year as soon as the monsoon sets in June, I will be there in Kanyakumari with my arms spread on the tip receiving it.Atleast I started dreaming about that Shawshank Redemptionesque picture, where Andy Dufresne enjoys his redemption on a rainy day. But dreams, are never to come true, exactly the way we want. June passed, schools re-opened, but I never went to Kanyakumari, neither did the South West Monsoon arrive with all its might. Even then I never lost hope, and just like Andy told Red, I kept telling myself and RED - "Remember, Red. Hope is a good thing, maybe the best of things,and no good thing ever dies."
Sometime back, I had made this idea of traveling the entire stretch of Kerala from Kanyakumari to Mangalore with Abhi. That never happened after our Himalayan Odyssey 2007. We were too busy in our own worlds. Nevertheless I went on and made a rough plan sometime at the start of this year. When I was sure that I won't be going to Kanyakumari directly from here, I thought about traveling the other way round. Facing the monsoon instead of chasing it; by going to Mangalore and then start from there, touch Kanyakumari and then back to Bangalore. And for all this my travel companion is to be Red. Red never had a long ride after her revamp and was yearning like me too.

By the start of June this year, as I read the anthologies -"Mazhakkalam" and "Mazhapusthakkam"- about rains, I had gone mad about it and decided that I have to do this trip as soon as possible. I decided for the August 15th weekend as I need to take only 4 days of leave and club the two weekends to make it a 9 day affair with the roads and rains. I did some changes in the plan to strike the right balance between an exhaustive ride and a leisured one. Thus I decided to touch Mangalore from Bangalore on day one, then to my home in Vadakara, then to Ernakulam, and then finally Kanyakumari at the end of fourth day. I was a bit confused about the return part, as I was not sure whether to come back through Kerala to Bangalore or go touch Rameshwaram, then back to Bangalore through Madurai. The second option would be too exhaustive and long and would need more leaves.Riding back through Kerala was the only option. But again I was confused. Should I take the dangerous and risky Kambam-Theni-Madurai route or the boring, but untried Walayar-Salem route or the tried and tested Wayanad-Mysore route? Kambam-Theni would really risky and being alone I didn't want to try that. Walayar Pass would be really boring with straight highways, mad TN private buses and dry atmosphere. Wayanad-Mysore was aready done twice or thrice by me. Then a friend of mine told me about the Nilambur Naadukani Choram Pass which will take me to Gudalur and then to Gundlupet and Bangalore. In one split second I decided that is the route I will be taking. I enquired about the road conditions with him, and heard its just okay.

So here is the plan: 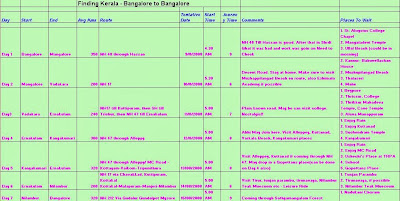 I wanted Abhi to be part of the trip since we really know each other well the way we ride. I informed a few of my other riding friends about the plan, but they all had pre-planned trips on their long weekend. Abhi was not really sure about the complete trip, but promised me to join atleast from Vadakara or Eranakulam. So I went ahead planning the entire journey.

If I need to have a hassle free ride, I have to start with RED. So I first made her ready by changing the oil, changing the clutch cable, acquiring the spares and tools and the last part of cleaning her up and getting a Pooja done is to be completed. I went and patched up my Cramster saddle bags, bought a tarpoline kind of material to protect my camera bag, collected a lot of polythene covers to put my dresses, got a new torch instead of the old one which was rusted along with the batteries, renewed my bike insurance which was about to expire on the day I was suppose to leave and collected my first-aid and essential medicines. By this last Sunday I was ready with almost all the stuff. All I have to do was wait for 9th of August; the coming Saturday, finish off my pending office work, complete my MS Mid Sem report, and probably write this post.

I really wanted this trip to be done. I do not really know for what, may be for my own satisfaction, may be to explore more places, or may be to capture Kerala and Rains in my Camera or may be just to escape. Just to escape from the temporary phase of life, which is professionaly good and personally pathetic. Whatever it is I just wanted to ride.

I know the road ahead will not be easy. Atleast I have made it some what easy by travelling maximum through the National Highways and State Highways. But it is not that simple as riding it out at 80Kmph. I will have to face Ghats like Shiradi and Nadukani, the infamous private buses of Kerala from Kasargod to Trivandrum, bad roads, and then my eternal love - The Monsoon Rain - will be dancing all around me I all her mighty. Family approval was another thing, but after my odyssey they have kind of lost the hope in me. I had a bad ankle pain a few days back, which kept recurring after my freaky accident on the bike last year, and when I told my Dad about the trip he quipped; "I guess now you would not be having any pain, right?" I said No, with a sad smile on my face.

But when I look at the positive side, I will be visiting a lot of places for the first time. I can capture Bekal Fort on a Monsoon morning, I may ride through Muzhappilangad Drive In Beach, I can be at my beloved alma-mater on my Bike, I can enjoy Kuttanad as well as the curves of Kottayam section of MC Road, I can watch sunset and sunrise at Kanyakumari with RED, I can visit Thunjan Parambu and Thirunavaya on my way back, I can drop into the Woods of Nilambur if time permits and finally I can ride in a Kerala Monsoon. Rains!! I love them.

So come this Saturday, I am gonna ride. I am gonna explore. I gonna leave Bangalore with RED to ride through Kerala; my beloved God's Own Country. I may be alone out there; but I am sure I will enjoy it to the core.

I hope Abhi is down there waiting for me.
I hope I can complete it without any issues.
I hope the Monsoon is as mighty as it has been in my reads and dreams.
I hope.
Posted by Dhanush | ധനുഷ് at 10:03 PM 9 comments:
Email ThisBlogThis!Share to TwitterShare to FacebookShare to Pinterest
Labels: bangalore to bangalore, finding kerala, hope, kerala, monsoon, RED, ride, shawshank redemption, trip
Newer Posts Older Posts Home
Subscribe to: Posts (Atom)